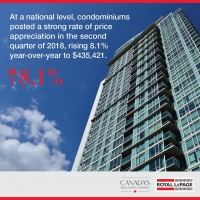 Given the unusual market trends in the last couple years, it comes as no surprise that the Real Estate market across Canada has been something of a spectacle in the media both domestically and abroad. The housing market affects everyone and people are rightly interested in what led to the pace of price increases, but more importantly, what the future holds. Will there be a catastrophic crash as promised by some zealous columnists? Will prices hold steady with stagnant growth? Or will prices continue to rise?

In order to answer these questions, we need to understand the factors at play in this equation. For simplicity’s sake, we will focus on the Greater Toronto market while making reference to broader economic trends across the country. So what do we know? We know that there was a massive spike in home prices in 2017 and while 2018 hasn’t been quite as extensive, prices are still on the rise albeit at a much more conservative growth rate. We know that the spike in ‘17 was preceded by less extreme but still faster than normal growth in ‘16, and followed by policy changes which, along with sliding consumer confidence exacerbated by negative headlines, have begun to cool the market considerably.

At the end of 2017, buyers were frenzied, trying to beat the clock and either upgrade their property or enter the market. The reason for the rush was twofold. Firstly, the impending mortgage stress test was poised to reduce affordability by about 20%, and secondly, there was a notion that housing was becoming a runaway market which buyers would miss out on if they didn’t enter at the ground floor. So buyers were contending with two forces poised to affect their ability to participate in the market later and thusly felt compelled to buy right away.

But there were other less obvious reasons that demand was so high. These reasons had less to do with speculation as to potential future market conditions, and more to do with actual present conditions. These factors might reasonably explain why demand for housing had been steadily increasing and whether it will continue to do so or whether it will dry up. Let’s examine some broader economic trends and how they affect the Canadian housing market: Economic Growth, Population Growth, Immigration, Jobs, and Millennials.

Of G7 Nations, Canada led the pack in 2017 with year-over-year GDP growth over 3%. Having a strong GDP provides a powerful incentive for businesses to come to canada and create more jobs which further invigorates the economic climate. All of this leads a positive feedback loop wherein positive economic trends foster conditions which in turn lead to further growth. So it should come as no surprise that Real Estate has been one of the largest contributors to the canadian economy since the 2008 recession and its proportionate contribution is still growing.

This fantastic economic picture has led to the strongest employment in over 40 years. At only 5.8% unemployment, we’re approaching full employment. These strong employment figures mean greater numbers of people are entering the housing market or upgrading their homes.

With such strong incentives, there is little wonder Canada had the fastest  population growth of advanced nations in 2017, at 2.4%, primarily driven by immigration. Today, 1 in 5 Canadians were born outside the country and that figure is set to increase.

Vancouver, Toronto, and Calgary were ranked at #3, #4, and #5 respectively on the Economist’s top 5 most liveable cities in the world. Canada is a highly desirable place to live.  yet despite this prominence, the cost of living in Canadian cities is far below that of other world-class cities, further attracting emigrants from across the globe.

And while housing prices running rampant from the domestic perspective, Canada is still a bargain on the global scale.

Another strong source of housing demand comes from Millennials, who are twice as likely to live at home as the previous generation. There has been a bit of a lag in demand as fewer young people were shopping for homes however it seems that many of this cohort are now beginning to enter the market. This represents a ton of pent up demand about to hit the market, with 69% of non-homeowner millennials planning to buy in the next year. Merely as a function of the number of people in this demographic, they will shape the market.

Goodwill is difficult to measure but all of the numbers point to Canada having a lot of it. If the nations top cities have truly achieved world-class status and everyone just noticed all at once, it would explain why prices rose so dramatically and in such a short span of time.

Demand is high and supply is lagging behind but prices can only get so high. There is an enormous untapped market of young people about to explode onto the market. Our economy is incredibly strong, employment is at a record high, and most of our smaller cities are very affordable. Those major cities which aren’t as affordable to locals are still an incredible deal on the global scale.

Will we be the victims of hubris for thinking our biggest cities ought to be international destinations? Has the fervor let to a runaway market propped up by speculation and emotionally-fueled demand?

With so much of canada’s prosperity hinging on housing and related industries, we would be in a perilous situation if anything were to degrade our employment levels. Unemployment leads to default which in turn may lead to a market collapse. Any sufficient threat to canadian employment has the potential to topple housing markets whose constituents are primarily house poor and over-extended.

With millennials poised to take over as the largest segment of homebuyers and with their willingness to move in order to afford a place to live, buying habits will change, and prices in the major cities are likely to drop or at least see slowed growth as the price wave makes its way outward to the suburbs and rural areas.